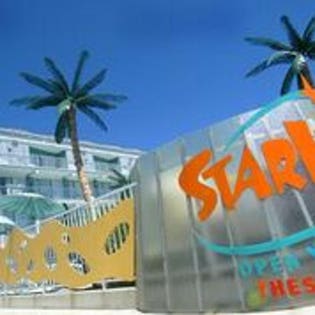 If you love graphic turquoise wallpaper, kidney-shaped coffee tables, lava lamps and plastic palm trees, then you must spend at least one night at the Starlux. Part of the Morey’s Piers complex, which is celebrating its 50thanniversary, the boutique hotel is located in Wildwood, on the southern end of the New Jersey shore.

Built in the 1970’s, the hip and playfully retro Starlux offers a nostalgic nod to Doo Wop style with 45 rooms and two Airstream trailers. The décor is what most of us picture as iconic mid-century modern: clocks have starbursts, chairs are made of molded plywood, colors favor shades of orange and teal and, yes, there are lava lamps in the rooms. Outside, there are roller coasters, Ferries Wheels, Tilt-A-Whirls, Carousels, swimming pools and the beach.

As for the plastic palm trees, “We began to use them in the 1970s because we associated them with the 1950s,” says Jack Morey, son of the founder of Morey’s Piers. During the opening of the Starlux, New Jersey governor Christine Todd Whitman planted the “species,” naming it the Official Tree of the Wildwoods.

In 1996, Jack Morey’s father sought advice about how to develop his property. Today, Morey points to the letter he received as a priceless piece as history that has guided him in making stylistic decisions.

“You can’t, and shouldn’t try to make Wildwood into something it isn’t,” writes architect Steve Izenour, who worked in the office of Venturi, Scott Brown and Associates, Inc. “What Wildwood is, is one of the last really down and dirty, TACKY with a capital T, beach resorts. What you need to do is to take Tacky to new heights. In an increasingly homogenized commercial world it’s the perfect counter punch strategy, and given the years of ad hoc evolution it took to make it what it is, nobody, not even Disney, could beat you at your game”

Izenour goes on to advise him on the design and building process and ends with, “When you’re done, which you never are since you always have to have next year’s attraction, you have the biggest, gaudiest, brightest, tackiest piers in the world!”

Jack Morey is planning an $11 million expansion of the Starlux that will add 55 rooms, common space on the roof, another pool and bar. We can rest assured that he will not forget Steve Izenour’s words.