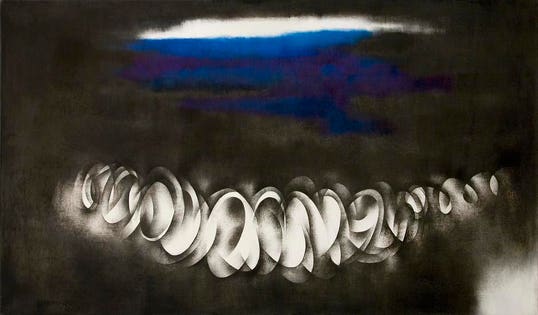 A serene cloud of dazzling bold blue and purple hoovers over a chain of linked circles, the velvety oil on canvas Ebb Tide (1975) is inspired by Norman Lewis’ visit to Greece, where he became enchanted while viewing the ocean and mountains at different times of day and night.

Lewis is one of seven solo artists from 10 galleries featured in the stunning return of Just Above Midtown (JAM) at Frieze New York, which opened to the public today.

Lewis’s art borrows from his passions for classical and jazz music, along with nature, ancient ceremonial rituals, and social justice issues critical to the civil rights movement.

“We were growing up together. We floated on that energy,” Bryant said of JAM’s influence on 1970s Manhattan, a gritty era where art filtered through the air like glitter that would impact generations of artists long after it closed in 1986, moving twice, first to TriBeCa, and then to its final location in SoHo, both downtown with a very different vibe than “just above Manhattan” on West 57th Street.

JAM, the first gallery space to exhibit work by African-American, Native American, Latino, Asian, and other artists of color in a major gallery district, is honored in a special section at Frieze curated by Franklin Sirmans, director of the Pérez Art Museum Miami (PAMM).

“When I moved to New York, I had a lot of interaction with African American artists. One of the things they said a lot was: ‘They won’t let us. They won’t us show our work.’ And what they were referring to was museums and galleries, the art world. At one point I said … let’s just do it ourselves,” said Bryant, who was 23 when she founded JAM.

A portion of the sales from the galleries in the JAM section will be donated to Bryant’s latest non-profit initiative, Project Eats, a neighborhood-based urban agricultural partnership and social enterprise that creates sustainable food and equitable distribution among communities.

“The JAM section significantly acknowledges the foresight of gallery director Linda Goode Bryant, the founder of the Just Above Midtown gallery, and the influential artists that she showed,” said Deborah A. Goldberg, Ph.D., who gave private tours last night to V.I.P. guests of Deutsche Bank Wealth Management Lounge. “Starting in the 1970s, Bryant gave artists of color, including several women, a place to show their groundbreaking work. MoMA just announced this week that they will mount an exhibition about JAM in the fall of 2022.”

JAM’s other artists and galleries at Frieze include:

“Our decision to honor the JAM initiative in general and Ming Smith in particular was unanimous. We recognized that the presentation constituted an important recuperation of an artist’s practice that is not as well-known as it should be,” said Nancy Spector, artistic director and Jennifer and David Stockman chief curator of the Solomon R. Guggenheim Museum. “Her booth at Frieze is filled with vintage prints, which is rare to see in the case of artists active in the 1970s and early ‘80s who did not have a market at that time.”

The eighth edition of Frieze is open to view and buy art from more than 1,000 artists until Sunday, May 5. Buy tickets here, and find the best way to get to Randall’s Island Park, including the ferry at East 35th Street and FDR Drive, the quickest and most picturesque way to travel.

Deutsche Bank became the lead sponsor of Frieze one year after the fair’s launch, and in 2010 its Private Wealth Management business supported the fair’s expansion to New York. The German multinational investment bank and financial services company headquartered in Frankfurt is the fair’s lead global partner.