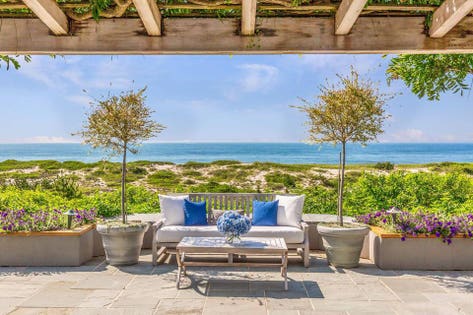 The East Hampton estate built and owned by James H. Evans, former chairman and CEO of rail giant Union Pacific, is on the market for $60 million.

The roughly 6.7-acre, two-lot property at 32 Windmill Lane is now second on the list of most expensive Hamptons properties, according to Out East, topped only by a $150 million listing in Southampton. Its five-bed, six-bath main house includes a full-floor suite, along with amenities like a 50-foot heated pool and beach access via a 300-foot private path. Spanning 5,500 square feet, it features a living and dining area with a cathedral ceiling and doors that open to an oceanfront terrace. The sunny kitchen has a fireplace and a breakfast nook.

Its sister-lot, meanwhile, sports a smaller cottage with three beds, 2½ baths and its own swimming pool. Built in the 1950s, the guesthouse is one of the oldest homes in the Further Lane area. Though East Hampton Village was settled in the 1680s, the area toward the ocean was left as farmland for centuries.

Evans bought the property in 1986 and commissioned builder Pat Trunzo to construct its main house and architect Alfred Scheffer to expand the guesthouse, according to Sotheby’s International Realty agent Frank Newbold, who is sharing the listing with colleague Valerie Smith.

However, for those looking to do their own thing, the estate’s zoning would allow a 12,477 square-foot oceanfront residence and 6,040-square-foot guesthouse, plus finished basements for both.

Lauded as an American success story, Evans grew up in the Depression-era south and worked his way up to eventually graduate from Kentucky’s private Centre College. After signing up with the U.S. Navy during World War II, and later trying his hand at a law career, Evans joined the Union Pacific Railroad in 1965 as a director. He eventually became head of the corporation and helped procure a merger that created the nation’s largest rail system at the time. Evans passed away in 2015 at the age of 94.

His former estate may face challenges of its own, as the Hamptons housing market grapples with a decline in sales, particularly in the high end. Volume is lagging in every price point so far this year, according to a mid-year report from the brokerage Town & Country. On the higher end, 16 homes have been sold for $10 million or more, down from 20 as of July in 2018. But due to the listing’s location on the ocean, Newbold is confident in its ability to attract a buyer.

“Oceanfront is always the gold standard and there is very little on the market particularly in East Hampton Village,” he said. “The property is also unique in that you are about a mile in each direction from the nearest public beach access, so the beach in front of this property is always tranquil.”