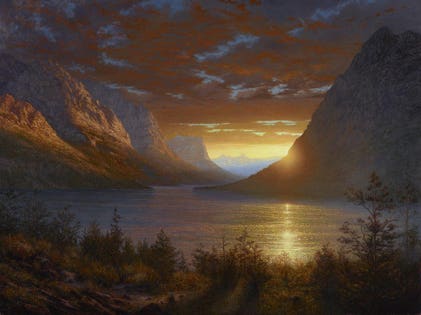 The setting sun’s multi-faceted reflection on the water draws the viewer into the sweeping landscape of The Eternal Now, Saint Mary’s Lake, as if s/he were wandering toward the mountains, peering into the sky, and soaking in an awe-inspiring moment in time that’s both fleeting and grounded in the natural Montana environment.

“When I’m painting fast, I am in a state of contemplation. With this specific painting, I wanted to intentionally freeze the moment, much like Vermeer froze the moment with the woman holding the pitcher,” Ken Salaz said in an interview. “As an artist with a background deeply steeped in Transcendentalism, it’s not East meets West, it’s the west(ern United States) meets the Native (American) West. When I sit down to make a painting, I’m not just copying nature. When I’m painting, I’m trying to capture every changing face of nature.”

Salaz creates both a plein air (outdoor) and studio study, and prepares two or three small panels, about 7-inches-by-11-inches, with different values and different sky colors, before beginning work on a large-scale landscape.

“I have painted so many sunsets, I already know what colors to use,” he explained. “The palate itself I call strings of colors, which are already mixed on my palate so when the moment hits, I really go into overdrive and go fast. The colors are already laid out. It’s pretty exciting. I paint sunsets all the time, and it’s like painting a speeding bullet.”

Salaz will attend the opening reception, scheduled from 1 p.m. to 6 p.m., and the exhibition will be on view through June 28. The Upper East Side gallery is simultaneously toasting the release of Salaz’s book, Landscapes in Oil: A Contemporary Guide to Realistic Painting in the Classical Tradition, celebrating the illustrious tradition of Hudson River School masters such as Thomas Cole, Frederic Church, and George Inness, while dedicating a chapter to each of the fundamental elements of landscape painting: drawing, value, color, composition, and light quality.

“It’s been said that Mozart could see an entire symphony in his mind and could write it down. That’s kind of the feeling I have,” said Salaz. With The Eternal Now, “I saw the entire painting when I saw that sunset. Everything is connected and exists together. It doesn’t always happen.”

Salaz’s paintings convey a sensation that you’re part of the very landscape he’s meticulously depicted on the canvas. “Clients say ‘I like this painting because I feel the water as if I am wading my legs.’ That’s why it’s better than a photograph. It’s a real sensual and a real tactile feeling of nature,” he said.

Born in 1970 in southern California, Salaz spent his youth living in Mexico, the U.S. Southwest, and the Appalachian mountains of West Virginia. He now lives in Tarrytown in New York’s Westchester County, having left Manhattan’s West Village, after his first son, Emerson, now 7, was born. He and his wife, Tamie Isaabella Salaz, a figurative painter who he met in art school, also have 15-month-old son, Dakota.

The son of a mostly Irish-American mother, and a father who is partial descendant of the Yaqui tribe — which received federal recognition when the painter was a child, stirring strife in southern Arizona where he had family living both on and off the reservation — Salaz’s ancestral heritage and life experience are intrinsic to his artistic inspiration and mission. After graduating from Cooper Union, Salaz explored Asia, Central America, South America, and Europe, painting landscapes and copying masterworks at museums throughout his travels.

“On my Native side, I’m basically a sun worshipper. I worship the light. There is a sun dance in the Native American tradition. The sun is the father (from) where all beings emanate, and the earth is our mother and gives us our life here,” Salaz explains.

Salaz returned to his studies under masters including Russian born painter Leonid Gervitz of the Repin Academy, the largest and oldest art school in Russia, and American artist and painter Nelson Shanks, best known for his portrait of Diana, Princess of Wales. Salaz trained three years at the Water Street Studio of American realist painter Jacob Collins. He spent two summers with Collins at the Hudson River Fellowship in the Catskill Mountains, where he currently serves a senior fellow and instructor at the Fellowship.

“My hope, in the broader context, is that my work helps revitalize our nation’s awareness of our true American heritage, which is rooted in the relationship to the land, from (Walt) Whitman, to John Muir to (Native American Suquamish and Duwamish) Chief Seattle,” Salaz said. “In this present time, with so much at stake regarding our nation’s direction, it is imperative we remember the founding ethical relationship to our environment, our world, as well as to beauty and goodness. The paintings are the visual embodiment of an idea that we are here as caretakers of the earth, as well as beauty and goodness. I paint in order to strive to be the modern voice for (Ralph Waldo) Emerson and the rest.”

Salaz spends his days painting, and his nights back in the city, working as a magician, mentalist, and pick-pocket, entertaining such celebrities as Bruce Springsteen and Jimmy Fallon.