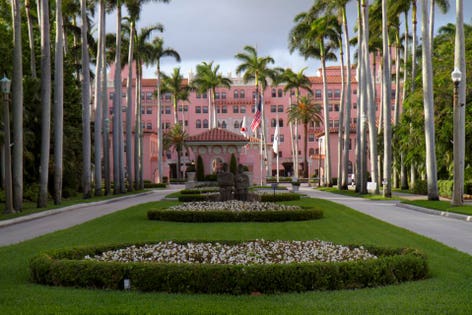 Michael Dell’s recent purchase of the Boca Raton Resort & Club is closer to $1 billion rather than closer to half-a-billion dollars. According to a June 11 Fitch Ratings report, the tech billionaire’s MSD Partners paid $875 million for the ultra-luxurious hotel and the adjoining members-only Premier Club, adding the historic resort to a portfolio that includes five-star hotels in Hawaii and California.

When Dell closed the transaction earlier this month, the purchase price was pegged at $462 million. But that figure only applied to the resort. The Premier Club added another $285.3 million to the final price that also included $22.9 million for reserves and closing costs, according to the ratings report. Regardless, the sale remains the biggest in Palm Beach County history.

MSD Partners, an affiliate of MSD Capital, the private equity firm that manages Dell’s and his family’s private assets, snatched Boca Raton Resort & Club nearly a year after a separate deal to purchase 1 Hotel South Beach in Miami Beach fell apart. In 2017, MSD Capital partnered with TruAmerica Multifamily to purchase the Sienna at Vista Lakes apartment complex in Fort Myers. The partnership paid $66 million for the 640-unit network of garden-style buildings on 35 acres.

Affiliates of MSD also own a portion of Knox District, a mixed-use neighborhood in Dallas, TX, the Fairmont Miramar hotel in Santa Monica, CA and two Four Seasons Resort hotels in Hawaii. Last year, Dell was revealed as the buyer who in 2014 paid a record $100.47 million for a penthouse in One57, overlooking Central Park.

In financing the Boca Raton Resort & Club deal, MSD Partners put in $297.9 million in equity and obtained a $600 million interest-only loan with a floating rate and a two-year term, the Fitch report states. The Dell-owned private equity firm used the 1,047-room resort, which operates under the Waldorf Astoria banner, and the Premier Club as collateral, and intends to invest another $75 million in renovations, amenity package upgrades and activating public spaces.

Following a site visit in May, Fitch analysts rated the Boca Raton Resort & Club A – -. However, the ratings agency found that the iconic hotel, originally built in 1926, doesn’t measure up against other competing luxury resorts.

In comparing the Boca Raton Resort & Club to The Breakers in Palm Beach, PGA National in Palm Beach Gardens, Eau Palm Beach in Manalapan and Trump National Doral Miami, among five other resorts, Fitch found that the current daily rate of $311 of Dell’s latest acquisition averages about $365 less than its rivals.

The Boca Raton Resort & Club’s revenue per available room, a hotel industry standard metric, was $197 compared to $250 at competing hotels. Food and beverage revenue, at $83 million, topped the $71 million in room revenue in 2018, Fitch reported.