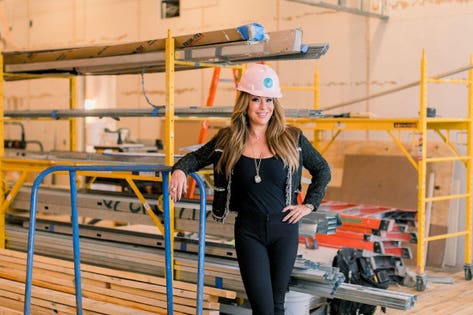 “Real Housewives of New York” star Barbara Kavovit is the founder and CEO of Evergreen Construction.

Barbara Kavovit is busy. She’s starring on the new season of the “Real Housewives of New York” and has a novel coming out, while also running her business, Evergreen Construction.

Being the founder of a construction company in New York City, it goes without saying that Kavovit works in a male-dominated field. Ten percent of the industry’s workforce throughout the country was female in 2018, compared to 50% for real estate, according to the U.S. Bureau of Labor Statistics. In commercial real estate specifically, 35% of the workforce was female in 2015, the women’s organization CREW Network found.

And while those numbers don’t outwardly indicate sexism, there is evidence of its existence. A February 2019 study from the equipment rental firm BigRentz found that 73% of women surveyed said they lost promotions to men and 60% felt discriminated against based on their gender. If a bias does exist, Kavovit doesn’t have time to dwell on it. Unlike other CEOs of construction and real estate firms, Kavovit did not inherit a business from her family. Instead, her father was a mechanical engineer for the New York Power Authority and her mother was a school teacher.

After growing up in the Bronx, Kavovit graduated with a Bachelor’s in Finance from SUNY Oswego. She founded her first company, Anchor Construction, and was named one of “Crain’s New York’s” “100 Most Influential Women in Business” before she turned 30.

Her book, “Heels of Steel: A Novel About The Queen of New York Construction,” which tells the story of a female developer’s battle to build the tallest skyscraper in New York City, is due out on June 25. Evergreen Construction, meanwhile, recently finished renovating 20,000 square feet of space for Hyatt New York’s Exhale Spas and is now working on a project for the BKLYN CLAY ceramic studio.

I caught up with Kavovit in the middle of a busy work day to ask about her career and how women can follow her Gucci boot tracks into the field of construction.

Heather Senison: What sparked your interest in construction?

Barbara Kavovit: I was very forward-thinking and very aggressive and very determined to make a mark in the home improvement business. I didn’t really know what I was doing right out of the gate, but I was armed with a big dose of confidence and I got that from my dad. When I was 9 he really instilled this feeling of being independent and he taught me how to hold a hammer. We built bunk-beds together and did a lot of other projects when I was growing up in the Bronx. Doing these projects, and not being in the kitchen baking cupcakes with my mom, really changed the course of my life. It gave me a whole other view on what women can do and how to build self-esteem. That hammer is truly a metaphor for being confident and self-sufficient.

According to the U.S. Bureau of Labor Statistics, 10% of the construction workforce was female in 2018.

HS: How did you get your first job in the industry?

BK: I literally made up some business cards for $60 and sat outside of a wealthy shopping center in Scarsdale and I would go up to women and I said, “I just started this small home improvement business, is there anything that needs to be fixed?” And they would say, “oh yes, I’ve been asking my husband forever to fix this,” or, “I can’t get the handyman to show up,” or, “I keep getting overcharged.” So I would have all these women call my parents’ house and my mom would answer the phone and she’d be like, “it’s Mrs. Burnbaum of Edgemont and she said you’re going to replace the trim around her doors?,” and that’s exactly what happened.

HS: What has been the biggest challenge in your career so far?

BK: The challenges never end. If you’re in business, there’s challenges every day. In construction I don’t ever want to be the person who’s like, woe is me, I’m a woman in construction. There’s pros and cons, like in every business, but construction is just notoriously known for being a man’s world. Ninety-nine percent of the people that run construction companies in New York City are men. I think there’s maybe one or two other women, and [their companies] were handed down from their fathers. To start your own construction company in New York City, you have to have balls of steel and not take no for an answer, and learn to deal with condescending nonbelievers. And anybody judging race, sexuality, gender, you’re dealing with those people all the time, in my business a little more so because I can be undermined by people on job sites.

HS: I guess that answers my next question, have you had experiences as a woman in construction that you think would have been different for a man?

BK: I was just telling someone the other day, I’ve been in the New York City construction industry for over 20 years, and it has behooved some of the architectural firms or commercial real estate brokers to put me on a rotation of possible, viable companies to go out to bid for corporate and retail projects, because I represent diversity and a unique company, and that still doesn’t happen. To just even get projects into the office can be a struggle and a fight. But luckily there’s the media and people like you out there that find out about women and other people in these types of businesses and how they are managing and thriving and because of that we get more awareness and hopefully, as time goes on, more and more people will change and the way of thinking will change and more women will be in positions to hire companies like mine.

HS: Do you think women in construction in the United States are mostly in cities?

BK: There’s a lot more support in the larger cities. In New York every year I go to the [awards luncheon for the] Nontraditional Employment for Women, which teaches women the trades, so I think there’s a lot more access for women to learn. There are the unions, you can come in as an apprentice and eventually work your way up to be a journeyman. I did recently read an article about a few women that are oil diggers that I found interesting, and it’s the same story, there’s just no access. It’s so hard to break through that ceiling. But if you are in areas like New York, Chicago, Los Angeles, I think there’s greater access and more organization. There’s the Professional Women in Construction of New York City, the National Association of Women in Construction, and then there are the organizations that if you own a business, you can join and try to get contracts.

HS: Speaking of the National Association of Women in Construction, their data shows that as of December 2016, 45% of sales and office jobs in construction were held by women, whereas they occupied just 1.4% of production and material moving positions. Does this promote a misconception that women don’t want to get their hands dirty?

BK: Construction is a physical business, you can say all you want but we all know that physically, women are not as strong typically, and this business is grueling. You’re on your knees, you’re on ladders, you’re lifting quite heavy material. Aside from the trade of maybe painting, it’s a really grueling industry and it’s hard on the body so I think, physically speaking, it’s hard for a woman. Like I don’t want to lift drywall over my head, nor can I. And as far as being in the office, one of my greatest field supervisors is a woman. She doesn’t lift materials but she’s bossing 50 men around on a given day in the field.

HS: Thank you. Before we finish up, let me ask about your upcoming novel. What do you hope readers will learn from it?

BK: I would like them to take away an inspirational message. Even with being on “Housewives,” a lot of the comments that I’ve been getting are, “thank you for being a leader, showing us that we can be in business.” One woman just wrote to me yesterday, “because of you I’m going to start a furniture, fixture and equipment business,” and that to me is everything. I come from a place that has no resources, I had no resources. I started from scratch, just based on passion and $60, and I want to be able to inspire people that against all odds, you can do it. No matter what they tell you, no matter how hard it is, if you keep moving forward, you will succeed.

The conversation has been edited and condensed for clarity.