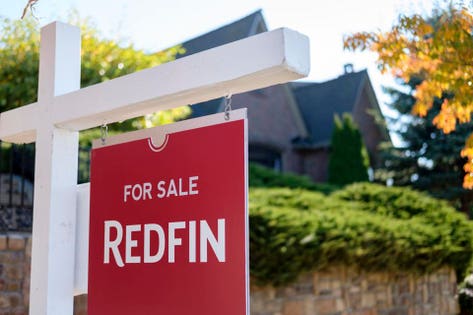 Revenue for the quarter was $197.8 million, up 29% from a year ago. While the company reported a net loss of $12.6 million, compared to income of $3.2 million in the second quarter of 2018. Net loss per share was $0.14. All measures were better than analyst estimates.

“The second quarter is a turning point for our company,” said CEO Glenn Kelman in a statement, pointing to expansion of its mortgage business and “instant-offers,” Redfin’s on-demand homebuying service. “The years of work we’ve invested in each of these businesses are now positioning us to be the first to deliver a complete solution at a national scale for people moving from one home to the next.”

Since 2006, the Seattle-based company has expanded to 90 markets, selling more than 170,000 homes worth upwards of $85 billion with a promise of lower transaction costs. Redfin pegs it’s market share at 0.94%.

But progress on its loftier goal—to make the whole residential real estate process more consumer friendly through tech—has been modest. Most U.S. housing is bought and sold the same way it has been for decades. Thursday’s better than expected report comes as a number of real estate companies new and old are announcing new digital-first services they also claim will remove friction.

Startup Opendoor has said earlier Thursday that buyers can now use its app to browse, book self-guided tours and submit bids on any home for sale is Dallas-Fort Worth, Phoenix and Raleigh-Durham. Opendoor’s primary business so far is high-tech home flipping. Homeowners sell the company their homes online, then Opendoor spruces up the place and tries to quickly resell. Zillow believes a similar model will make up the majority of it’s business within five-years.

Compass, a direct Redfin competitor in pairing human agents with home-grown software, on Tuesday announced it had raised a $370 million round of funding at a $6.4 billion valuation. Last week Realogy—parent company for brokerage brands including Coldwell Banker, Century 21 and Sotheby’s International Realty—announced a partnership with Amazon to connect home buyers with agents.

Wall Street analysts are split on whether Redfin will come out ahead when and if technology manages to really change the makeup of the residential real estate market. Shares have gained 27% so far this year, though the closing price of $17.72 Thursday was down from a 2019 peak of $23.45.

For the third quarter Redfin is forecasting revenue between $223 million and $233 million, which would equal year-over-year growth between 59% and 66%. Net income is expected in the range of  $3.4 million to $6.4 million.