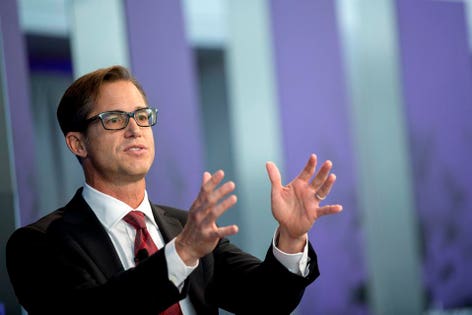 In its first quarter earnings report out Thursday, Zillow Group showed stronger than anticipated growth in the home-buying business it launched last year. The program, known as Zillow Offers, has been met with skepticism by Wall Street and housing economists, but the Seattle-based company clearly sees the model as its way forward.

Zillow purchased 898 homes and sold 414 in the first three months of 2019. Revenue from the homes segment was $128.5 million with a pre-tax loss of $45.2 million. By comparison, from April 2018—when the home-buying program launched—through December, Zillow purchased 686 homes and sold just 177, generating $52 million in revenue and losing $27.2 million.

“Zillow Offers is working and we are leaning in,” declared Rich Barton, Zillow cofounder and CEO, in an interview immediately following the earnings release. “We tapped the accelerator and the car moved. We’re out on the highway now.” The company also said Thursday that it will expand Zillow Offers to 20 markets by the end the first quarter of 2020, up from nine currently. Those include high prices and densely populated markets like Los Angeles and Miami, as well as up and coming markets like Austin.

Zillow shares have plummeted close to 40% in the last year, closing trading Thursday at $33.57 from a high of $65.42 last summer. Investors have struggled to digest the pivot from a low-cost ad business to an expensive home-flipping operation. A problematic update to its Premier Agent program, which in 2018 accounted for 67% of revenue, also led to higher than average ad churn and further spooked investors. The company said Thursday the churn is stabilizing.

Overall revenue for the quarter was $454 million, up 51% from a year ago, but the net loss also expanded to $67.5 million from $18.6 million. In three to five years, Zillow anticipates turning the revenue mix upside down, bringing in around $20 billion a year from its homes segment and around $2 billion from its media business.

Most people know Zillow—and subsidiaries including Trulia, Streeteasy and Naked Apartments—as a place to browse for homes and find out how much their friends’ houses are worth. Last April, the Seattle-based company entered the on-demand home sales market with Zillow Offers. Homeowners in nine markets can now solicit purchase offers from Zillow. The company buys the home, makes necessary renovations, and lists it for sale on the open market. Zillow’s goal is to turn each home in 90 days.

In February, Barton replaced Spencer Rascoff as CEO. Barton, who cofounded Zillow in 2004, served as its first CEO before passing the baton to Rascoff ahead of the 2011 public offering. Previously head of Expedia, which he founded within Microsoft in 1994, Barton was uninterested in running another public company. He says he returned this year because he believes consumers are finally ready for a change the home-buying process.

In the current second quarter, which coincides with the traditional spring home-buying season, Zillow expects to generate $230 million to $245 million in home sales revenue, and an adjusted loss of as much as $55 million. Total revenue for the quarter is expected to be between $569 million and $594 million, with adjusted losses as much as $5 million.

Shares were up sharply immediately following the after-trading earnings release.